"A Banquet of Consequences" by Elizabeth George 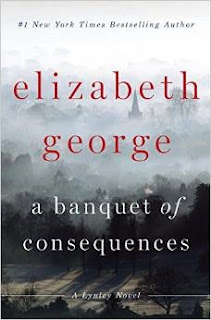 Elizabeth George's Inspector Lynley mystery series is probably one of my favourites in the style of English detective stories. It's the series that I keep returning to, when I slip into a reading rut and can't focus on reading something new, particularly to the first book in the series A Great Deliverance.While there are lots of decent mystery series circulating now, the first book in George's Lynley stories has a certain grim insistence about it that keeps drawing me back to it. And in her latest contribution to the series, George has written a story that in many aspects parallels her first--however, these parallels did not become immediately apparent until the climax of the story.
One of the things that I like best about Elizabeth George's writing is that she realises that a lot of times, the supporting characters can have better story potential than the main title character. She uses this to her advantage in almost all of the Lynley series, so much so that even though the series is referred to as the "Inspector Lynley series," other characters quite often become the central focus of larges portions (and sometimes all) of the stories. This is the case with A Banquet of Consequences as Sergeant Barbara Havers assumes the position of main protagonist with Lynley serving as one of the supporting characters.
Elizabeth George's books seem to always invoke a nearly tangible sense of suspense and urgency that no other writer manages to do, and A Banquet of Consequences did not disappoint. Other mystery-thrill authors that I read, I usually have no problem detaching myself from the story, putting the book down at any time, and doing other things--but Elizabeth George's writing pulls me in on an emotional level and I can't put her books down until I've finished them. So I try to read them when I know that I have a day with nothing else planned.
A Banquet of Consquences is the latest book in the "Inspector Lynley" mystery series by Elizabeth George. You can put yourself on hold for a copy at the Ocean City Free Public Library, here. If you want to start the series from the very beginning, you can find the series order here.

it's just amazing.
I really like it,.
I Love OCNJ

I’m afraid to say it out loud, but I see a glimmer, a small, teeny, tiny bit of openness in Barbara, a ray of hope that she can pull herself together and fulfill her potential. I would love to see that happen.