The Lonely Polygamist by Brady Udall 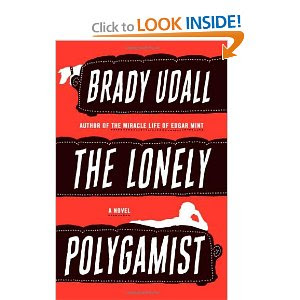 Golden Richards is just like your average guy. He worries about money, getting older and trying to avoid a mid-life crisis. The kicker? Golden is the titular polygamist with 4 wives and 28 children (+ or - a few stillborns and miscarriages). And as one might expect, life in the Richards house (or houses as the case may be) can get a little chaotic. The book focuses on just a few characters in the house - Golden, his 4th wife Trish and son Rusty. Each family member has their own proverbial crosses in life to bear - Golden tries hard to live his life by the Principle, desparately trying to avoid an affair with his boss' wife. Trish struggles with the loneliness comes with being part of a polygamist family. And Rusty just wants to be noticed and not humilated on a daily basis by his obscenely large family. Udall's book is funny and just an overall a good story about the American family. Fans of the TV show Big Love will probably enjoy it.
Posted by Allison at 6:48 PM No comments:
Labels: brady udall, family, fiction, polygamy

The Bedwetter: Stories of Courage, Redemption, and Pee by Sarah Silverman 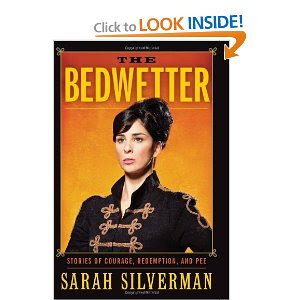 I like Sarah Silverman in small doses because the potty humor can get old after awhile. I always thought she stole the show with her bit in the film The Aristocrats. So I picked up her memoirs with the notion that it'd have its fair share of snarky laughs and foul potty humor. In that sense, I was pretty dead on.

Bedwetter starts out like standard memoirs - Silverman spends a lot of time talking about her childhood and zany family. What I found to be the most enlightening portion of the entire book was her adolescent battles with depression and yes, bedwetting. For once, Silverman uses just enough humor to relay how these traumatic experiences have affected her.

My only gripe memoir was that once Silverman reached a certain level of fame, she resorts to a whole lot of name dropping (with one exception involving a sweet anecdote about Chris Farley) and not much else. There are also a lot of pretty gross photos of her and her TV show cohorts. 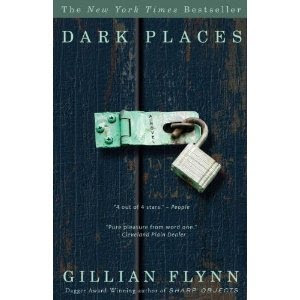 As a rule, I'm not a big fan of suspense and/or mysteries. However, once in awhile, it's nice to break out of a comfort zone and try something different. I had read Flynn's Sharp Objects awhile ago and enjoyed it, so it made sense to try her new book. Dark Places centers on the grim murders of the Day family back in 1985. Libby, our heroine and a young child at the time, managed to escape and her testimony was enough to convict her older brother Ben of the crime. The book shifts back and forth between the events that led up to that fateful day and the present day Libby. Everything is going along, until Libby gets involved with an underground crime group that wants to get to the truth of the murders. Did Ben really kill his entire family? Or was it someone else??

All in all, it was a very quick paced read and the tension held throughout the entire novel. As one could expect, adult Libby has some major psychological issues as a result of the murders. Despite being so flawed, you can definitely sympathize with her and the novel's conclusion is very satisfying.
Posted by Allison at 1:47 PM No comments:
Labels: family, fiction, gillian flynn, murder, psychology, suspense
Newer Posts Older Posts Home
Subscribe to: Posts (Atom)