Gone with the Wind by Margaret Mitchell

Back when I was a snotty teenager, my mother loaned me her copy of Gone with the Wind, declaring that it was one of her favorite books of all time. I, of course being a brat, pushed the recommendation aside and forgot all about it. Fast forward to about 3 weeks ago when I decided to give Mitchell's novel a chance after all. All I can say is what a difference a few years makes!
Set in Georgia before, during, and after the Civil War, Gone with the Wind is an epic of mammoth proportions depicting the evolution of its heroine (or villian, depending on how you look at it), Scarlett O'Hara. As the Southern Confederates bravely fight the Civil War, Scarlett and a cast of dear characters (including Melanie Wilkes, the wife of the man Scarlett is desparetely in love with and Mammy, the black nanny that raised both Scarlett and her mother from infancy) must cope with a complete change in lifestyle, battling hunger, violence, fear and even the threat of death.
Talk about a multi-dimensional character - Scarlett is fascinating - you simultaneously want to slap her for being such a bitch or commend her for her shrewdness. Though the bulk of the novel deals with Scarlett's longing for Ashley Wilkes, it's the scenes with her and Rhett Butler that are the most interesting and dynamic.
Despite the obvious racism and pro-Confederacy leanings, some say that GWTW is, in fact, the Greatest Novel ever written. After selling something like 25 million copies, I'd say that's a fair judgment. I guess Mom was right after all.
Posted by Allison at 5:23 PM No comments:
Labels: civil war, fiction, love, margaret mitchell, south

Set in any city at any time, Blindness is a story about what happens when everyone loses their vision together. Well, everyone but one brave and courageous woman. As the government struggles to deal with this massive impairment, all hell breaks loose - think Lord of the Flies meets The Road. Through all of this nightmare, the woman (none of the characters have names because what good is a name when you can't see the individual?) must bear the brunt of watching society decay into something far worse than anyone imagined.
The one time in my life where I didn't follow my cardinal rule (always read the book BEFORE you see the movie) and man, did that screw me up! This book is an extremely dark allegory for all the awful things that mankind is capable of. While you're reading the book, all of this washes over you and hits home. The film was far too literal for my taste and mildly exploitative. There are many graphic scenes of violence, rape and death that work better in the imagination then seeing it splashed for gruesome effect on the big screen.
Overall, a powerful and deeply moving book. You will be disturbed by the end.
Posted by Allison at 1:25 PM No comments:
Labels: blindness, deterioration, dystopia, fiction, jose saramago, rape

Valley of the Dolls by Jacqueline Susann

An entertaining novel that's full of melodrama, sex, intrigue, lifestyles of the rich and famous set in post WWII New York and California, Valley of the Dolls has been a classic soap opera read for the past thirty-plus years. The novel follows three heroines as they try to "make it" - Anne, the classic and sensible one, Neely, the young ingenue with a big voice, and Jennifer, the actress with a fantastic body. Set over the course of 15 years, readers unfortunately see the demands of fame, lost loves and struggles with drugs (the titular "Dolls")that plague each woman. I really enjoyed this one, though the end was a little depressing. The library has the movie adaptation of this, so it'll be fun to compare the two.
Posted by Allison at 2:11 PM No comments:
Labels: drugs, fame, fiction, friendship, jacqueline susann, love, sex

2 books in one! - A Graphic Novel Extravaganza!! 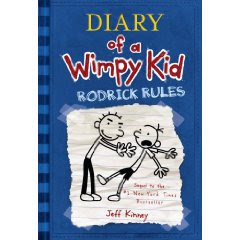 
This graphic novel is the continuation of the life and times of young smart ass Greg Heffley. Summer has ended and there's a secret that Greg is desperately trying to keep hidden from the rest of his classmates, but his older brother Rodrick might not be so forgiving. Again, a funny and fast read. Kinney also features more of Greg's younger brother Manny, who I think is awesome. 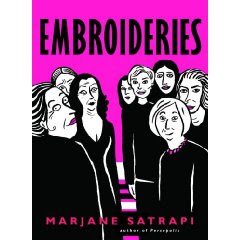 This slight follow-up to the fabulous Persepolis series explores the lives of the Iranian women in Satrapi's family. The book begins with an afternoon tea at her grandmother's house. There, her mother, aunt and their group of friends tell stories about their lives as women, and, more specifically, the men they've had to deal with. Though not nearly as entertaining as Persepolis, still a good read (though the sexual content may be a little too much for some).
Posted by Allison at 3:53 PM 1 comment:
Labels: graphic novels, jeff kinney, marjane satrapi
Newer Posts Older Posts Home
Subscribe to: Posts (Atom)