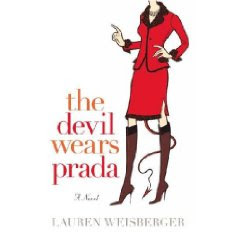 Andrea (Andy) is a freshly minted graduate of Brown University and dying to break into the world of journalism. The only problem is the sheer amount of competition in New York City. So when she gets hired to act as a personal assistant to the EIC of Runway magazine, a staple in the fashion world, she thinks it will be a perfect springboard into her dream career. The problem is is that her boss, Miranda Priestly, is the titular devil and proceeds to make Andy's life hell on earth. The woman really is demanding - calling her at all hours of the day, issuing half assed instructions and expects mountains to move for her. As a result, Andy's relationships with her friends, family and boyfriend start to fail. Can she pull it together?

I think this was one of those very rare times where the film adaptation was better than the original book. I'm a sucker for anything with Meryl Streep and I much preferred Anne Hathaway's goody-two shoes portrayal of Andy instead of the sarcastic, cussing smoker version in the novel. And anything to do with fashion is so much better when you can actually see it instead of just read about it.
Posted by Allison at 11:19 AM 2 comments:
Labels: fashion, fiction, lauren weisberger, new york city, women's issues

The Year of the Flood by Margaret Atwood

This book serves as a companion piece to Atwood's 2003 novel Oryx and Crake, in which the world has changed irrevocably due to political and biotechnological uprisings. In this book, a horrific pandemic plague has killed off virtually everyone, leaving Toby and Ren alone in their hideouts (a luxury spa and a sex club respectively). Atwood spends a lot of time describing the womens' pasts- they were both members of an agrarian compound group/cult called God's Gardeners, and there is a fair amount of sociological, Biblical and cultural commentary. This is Atwood's third novel that deals with dystopic societies - as usual, she delivers a critical and thoughtful book.

The Dead and the Gone by Susan Beth Pfeffer

Sequel to the fabulous Life as We Knew It, Pfeffer explores the same scenario (an asteroid hits the moon and changes its orbit, resulting in catastophic climactic changes on Earth) through the eyes of young Alex Morales, a teen living in New York City with his parents and two younger sisters. When the moon gets hit, both of Alex's parents are away from home, thus leaving the children to act as orphans (you never find out what happens to them) to fend for themselves. Alex is extremely mature and intelligent - making sure they ration their meals long before there is a dire need to, and he is forced to do any and everything he can to make sure his family survives. This unfortunately includes scavenging through dead people's things for items to sell on the black market.

As can be expected, the book is very somber and bleak. The Morales family is extremely religious, so there is a lot of talk about God and divine help, a concept which was absent from the first book. You may also argue that this book paints a helluva more realistic picture than the first one with the sheer amount of devastation and death. Though the book is marketed for teens, I still found it to be riveting - I think I finished it within a day.
Posted by Allison at 10:40 AM No comments:
Labels: apocalypse, family, fiction, susan beth pfeffer, young adult
Newer Posts Older Posts Home
Subscribe to: Posts (Atom)