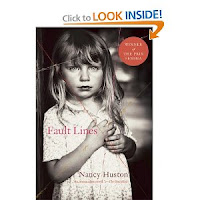 Shortlisted for the Orange Prize in 2008, Fault Lines takes an interesting narrative approach and follows four generations of a family counter-chronologically. Family secrets start to unravel as each generation's character is revealed. We first meet 6 year old Sol, a coddled spoiled brat of a character, as he and his family are on a trip to Germany to revisit a long-lost relative. Huston then introduces the reader to the other generations; his father Randall, grandmother Sadie, and great grandmother Erra. As each character's story unfolds, you can see how each narrative weaves into one. The last section, which centers on Erra, is the most eye-opening one and is the final piece of the novel's puzzle. I don't want to say much more because it'd be giving too much away, but suffice it to say, it's a pretty intense (and sad) read.
Posted by Ocean City Free Public Library at 2:15 PM No comments:
Labels: family, fiction, germany, nancy huston, nazi
Newer Posts Older Posts Home
Subscribe to: Posts (Atom)