Second in the Hunger Games trilogy, Catching Fire picks up right where Hunger Games left off. By cleverly tricking the organizers, Katniss and Peeta have just managed to survive the deadly games created by the Capitol that forces teens to murder one another for the entertainment of the masses. Instead of celebrating their joint victory, Katniss is targeted by the President for cheating the system. I don't want to spoil the second 1/2 of the book, but lets just say that Katniss and Peeta's nightmares are far from over...

I thought this was a tense follow up to the 1st book and I can't wait for the final part. 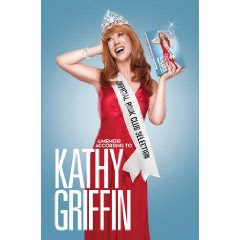 Kathy Griffin is one of those polarizing figures - either you love her extremely scathing commentary on celebrities and pop icons or you can't stand her. I happen to be in the former category - I love her stand up act and her Bravo show My Life on the D List makes me laugh out loud so I had to pick up her memoir. There's the usual "overcoming adversity to make it in show business" stuff, although you really get the sense that Griffin had to claw her way to any shred of publicity and fame because of her schtick. Overall, a funny and quick read.
Posted by Allison at 12:58 PM No comments:
Labels: hollywood, kathy griffin, memoir, non fiction

The Girl with the Dragon Tattoo by Stieg Larsson

Off of Amazon's website:
This debut thriller--the first in a trilogy from the late Stieg Larsson. Mikael Blomkvist, a once-respected financial journalist, watches his professional life rapidly crumble around him. Prospects appear bleak until an unexpected (and unsettling) offer to resurrect his name is extended by an old-school titan of Swedish industry. The catch--and there's always a catch--is that Blomkvist must first spend a year researching a mysterious disappearance that has remained unsolved for nearly four decades. With few other options, he accepts and enlists the help of investigator Lisbeth Salander, a misunderstood genius with a cache of authority issues.

Ordinarily, I'm not a fan of thrillers or many mysteries, but I've got to be honest - this was a riveting read. Though the pacing is a little slow to start with, once Larsson gets the ball rolling, the momentum is nearly breakneck fast. All of the characters are clearly multi-dimensional and incredibly smart, which sometimes isn't the case with this genre. Larsson even throws in a few red herrings and some creepy family drama as well. The story wraps up in a satisfying, but ultimately heartbreaking, conclusion. I can't wait to read The Girl Who Played with Fire next!
Posted by Allison at 9:03 AM No comments:
Labels: family, fiction, murder, stieg larsson, sweden, thriller

Life as We Knew it by Susan Beth Pfeffer

Off of Amazon's website:
It's almost the end of Miranda's sophomore year in high school, and her journal reflects the busy life of a typical teenager: conversations with friends, fights with mom, and fervent hopes for a driver's license. When Miranda first begins hearing the reports of a meteor on a collision course with the moon, it hardly seems worth a mention in her diary. But after the meteor hits, pushing the moon off its axis and causing worldwide earthquakes, tsunamis, and volcanoes, all the things Miranda used to take for granted begin to disappear. Food and gas shortages, along with extreme weather changes, come to her small Pennsylvania town; and Miranda's voice is by turns petulant, angry, and finally resigned, as her family is forced to make tough choices while they consider their increasingly limited options. Yet even as suspicious neighbors stockpile food in anticipation of a looming winter without heat or electricity, Miranda knows that that her future is still hers to decide even if life as she knew it is over.

Despite being incredibly bleak, this book offers a ton of "food for thought" - you'll immediately ask yourself how you would behave in particular situations and compare your strategies for living with the rest of the characters in the book. Even though Miranda is a teenager, her actions and motivations are simply admirable and mature. I managed to read this book in a day and I really couldn't put it down.
Posted by Allison at 8:58 AM No comments:
Labels: apocalypse, family, fiction, survival, susan beth pfeffer
Newer Posts Older Posts Home
Subscribe to: Posts (Atom)