Up from the Blue by Sue Henderson 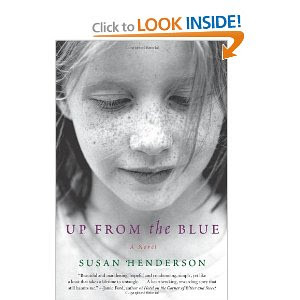 I heard about this book during a recent readers advisory workshop for librarians. Everyone raved about this debut novel and since I was lucky enough to score a free copy, I decided to give it a shot.
The story is told through the eyes of young Tillie Harris, a plucky girl who's not afraid to speak her mind. Set in the 1970s, life at the Harris household is strained at best. Tillie's father is in the army developing missile technology. He's about as strict as you can imagine. Tillie's mom suffers from crippling depression, spending the majority of her days in bed. Tillie idolizes her mother and doesn't fully understand her situation. When the family moves to Washington DC, Tillie's mom disappears and the things just go from bad to worse...
Overall, I liked this book. There have been comparisions made between Tillie and Scout Finch from To Kill a Mockingbird and that's a pretty apt description. She's a very likable character and you want to root for her within her dreary surroundings.
Posted by Allison at 10:33 AM No comments:
Labels: childhood, depression, family, fiction, sue henderson

Fall of Giants by Ken Follett 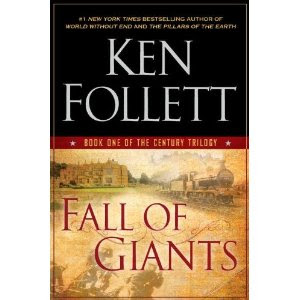 Every once in awhile, I enjoy a nice long saga. Double points if it's historical fiction. In the past, I've enjoyed Ken Follett's historical works Pillars of the Earth and World Without End, so I figured I'd check out his latest book Fall of Giants, which is the 1st book in his new Century Trilogy. Fall of Giants details the events leading up to and including World War I through the eyes of several different characters. What's interesting about FoG is that these characters are all not only from different socioeconomic situations (e.g. an Earl, a suffragette, a poor mining community), but also from different countries as well (Allies as well as German), so it was definitely enlightening to view the war through various lenses. The bulk of the novel deals with a lot of military talk, so if that's your thing, great. For me, at times, it seemed a little tedious. Despite that, Follett is a decent storyteller and his depictions of battle were very cinematic. As par for the course, Follett throws in a lot of unneccessary sex scenes into the mix as well.

It's probably safe to say that the other books in the trilogy will be about World War II and Vietnam, but who knows? At the rate, I'll definitely check them out.
Posted by Allison at 3:01 PM No comments:
Labels: historical fiction, ken follett, love, war, world war I
Newer Posts Older Posts Home
Subscribe to: Posts (Atom)