April 20, 2009 will mark the 10 year anniversary of the awful massacre/shooting at Columbine High School. While a lot of the information related to the shooting has become public knowledge in the past decade, Cullen's extremely detailed work sheds much light on the many myths and wrong details that still pervade popular culture.

For starters, Eric Harris was the ringleader of the duo (I had always thought Dylan Klebold was the main instigator) and a complete psychopath. The two were not really involved in the infamous Trench Coat Mafia, nor were they isolated loners subject to bullies. In reality, they were popular within their social circle, extremely intelligent and faked normalcy for over a year, deceiving friends, their families and other members of the community. Furthermore (and I found this to be the most shocking), Jefferson County Police had had knowledge that Harris was up to something bad. They had been alerted many times by the Brown family (Harris had threatened Brooks Brown on his website), but in the wake of the shooting, those documents mysteriously "vanished."

While the book is exceptionally well written and as I mentioned before, extremely detailed, I found myself very glad that I finished it due to its graphic descriptions and overall disturbing subject matter. As an aside, I felt the exact same way while watching Gus Van Sant's film Elephant, which is an obvious commentary/replication of Columbine. As a rule, I can handle films like Saw, Hostel, Devil's Rejects and other torture/bloody movies with no problem, but Elephant gave me nightmares for days. Same thing with this book.
Posted by Allison at 11:22 AM No comments:
Labels: columbine, dave cullen, high school shootings, murder, non fiction

In Other Rooms, Other Wonders by Daniyal Mueenuddin 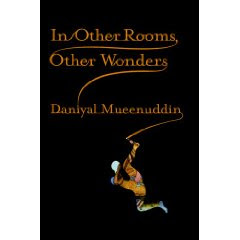 Set in Pakistan, this series of short stories revolves around the servants, family members and employees of wealthy landowner/farm manager K.K. Harouni. Readers only meet Harouni in one story, the rest of the time, he is a mere catalyst, representative of great power and opportunity, or else a figure to be manipulated.
The nice thing about this book is that characters appear several times throughout the different stories at different points in time. For example, Haruoni's nephew Sohail appears in "Lady in Paris," at a turning point in his relationship. He appears again in later stories in a much different type of setting.
The not so nice thing about this book is the abject poverty and sense of hopelessness can be brutal at times. While some of the characters enjoy their meager living situations (see "A Spoiled Man," which had a heartbreaking ending), the majority of the female characters in all of the stories are ruthless in their attempts to break out of their lower lot in life. I'm not ruining anything by saying that none of these stories end on a particularly uplifting note.
Despite the depressing subject matter, I thought the stories were written beautifully and the characters were properly fleshed out and sympathetic. I have a weird natural tendency to read a lot of Indian fiction, so it was a nice change of pace to read about Pakistani life.
Posted by Allison at 2:35 PM No comments:
Labels: corruption, daniyal mueenuddin, death, marriage, pakistan, sex, short stories

Thirteen Reasons Why by Jay Asher

Jay Asher's debut novel has an interesting premise - Clay, a high schooler receives a mysterious package of audiotapes in the mail. They are from Hannah Baker, who committed suicide a few weeks earlier. On the tapes, Hannah narrates the 13 reasons that led her to kill herself (i.e. the people that caused her such anguish). Clay was "lucky" enough to be on Hannah's list and must pass off the tapes when he is finished listening to them.
The story is obviously told in flashbacks that detail several indviduals who were just awful to Hannah. Pretty much any kind of bad high school experience is on Hannah's tape-drinking, sex, bullying. Though this is a YA book, the amount of teen angst is a little too much at times. Hannah herself doesn't really come off as a fabulous (or even likeable) character considering that suicide is an inherently very selfish act and she spends 250+ pages blaming everyone else for her death. The only character that you feel kind of bad for is poor Clay, who worshipped Hannah and never got up the nerve to tell her his true feelings, only to be rewarded with these depressing tapes.
For some reason, reading this book made me feel very tense, as if I was reading some kind of spy thriller. I have no decent explanation why. I guess I kept thinking there'd be a really nice twist at the end - like she was murdered or something. I guess Hannah (and Asher by default) was trying to say that all those participants on the tapes were the true killers. I don't buy it. Her 13 reasons were kind of weak, if you ask me. High school sucks, but not enough to kill yourself over it.
Posted by Allison at 2:46 PM No comments:
Labels: drunk driving, jay asher, rape, suicide, teenagers, young adult
Newer Posts Older Posts Home
Subscribe to: Posts (Atom)