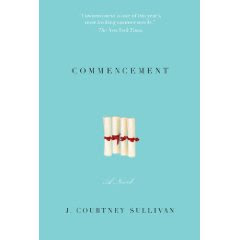 In their first semester of college at Smith, four girls who live on the same floor manage to forge a strong connection with each other, despite their completely different backgrounds. Bree is a Southern belle, April is the moody uber feminist, Sally has just lost her mother and Celia is the wannabe writer. The novel spans their wild times at college and what happens afterwards when the girls meet up for Sally's wedding. As can be expected during college, the girls experiment with their sexuality, drugs, alchohol, and social issues. As can be expected post-college, the girls have problems with relationships, jobs and finding their niche in the world. April is truly the only one that carries on with the feminism after graduation.

I think the problem with this book is that it tried too hard to be like a more socially conscious version of Curtis Sittenfeld's Prep but with college students instead of high schoolers. Instead, readers end up with something that's more chick-lit than Sullivan probably wanted (I'd chalk it up to the sometimes cheesy dialogue and heavy emphasis on sex). Despite all this, I'd still peg the book as a good beach read, though the "dangerous ending" that the book jacket details (and all that foreshadowing throughout the novel) is a little uneven.

The Man who ate everything by Jeffrey Steingarten

This is a book about man who eats food. A lot of food. As food critic for Vogue magazine, Steingarten talks about food the way some people talk about sports or shopping or family gossip. This book is merely his ode to gastronomy. He isn't just content to munch on bread in a restaurant, he tries for months to make his own perfect loaf. Same thing goes with ketchup. Hey, different strokes for different folks.

While some may wonder how in the world someone could spend 500+ pages talking just about food, Steingarten deftly weaves in his travel experiences around the world and this makes for some very compelling passages. His thoughts on how our food prejudices were also interesting to read. Steingarten argues that babies are not really repulsed by any kind of food. It's only as they get older and see how their parents interact with food that determines what they will and won't eat.

The No. 1 Ladies Detective Agency by Alexander McCall Smith

This is the 3rd selection in the Adult Summer Book Club and is the first book in the Precious Ramotswe series. Mma Precious Ramotswe has taken the inheritance money from her father and opened "The No. 1 Ladies Detective Agency" in Botswana. Her cases are relatively small and involve people from her local village of Garabone. Precious has no actual detective training, but uses her strong sense of intuition and a lot of common sense to solve her cases.
The books in this series are what you would call "cozy mysteries," in that there is limited blood, violence, obscenity and sex. I found that this book was quite pleasant with vivid descriptions of the African landscape and a charming protagonist. It should make for a fun discussion.
Posted by Allison at 12:59 PM No comments:
Labels: alexander mccall smith, botswana, fiction, mystery

Sworn To Silence By Linda Castillo

This is the first book I have read by Linda Castillo. When I was covering the book, and yes when processing books we do look at the flaps sometimes (or am I the only one who does it?). I saw that it had my favorite subject (to read about, not do) murder.
The lead character is ex-Amish chief of police named Kate Burkholder. Years before she had survived a brutal attack and now hides a secret past.
In this book young women are being murdered in horrible ways in the small town of Painters Mill, Ohio.
It's up to Kate and Special Agent John Tomasetti to catch the killer.
I liked the book, but I thought Castillo could have added more depth to Tomasetti and to the relationship between the two. I'm curious to see what the author does with the Kate Burkholder character in the next book.
Posted by Catherine at 12:09 AM No comments:
Labels: fiction, murder
Newer Posts Older Posts Home
Subscribe to: Posts (Atom)