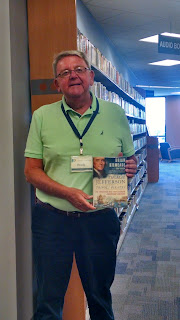 Dead Wake: The Last Crossing of the Lusitania by Erik Larson
A tragic mix of evolutionary development of submarine technology, politics of neutrality, and personal insights to the lives of her passengers.

Interesting Factoid: After the Titanic sank, new and safer life-jackets were designed. While they were installed on the Lusitania, there were no drills held that required the jackets to be used. The torpedoed ship sank within sight of Ireland, and many died because they stepped into the jack  rather than putting their arms through the armholes. Many ended up flipping upside down in the water and couldn't escape.

A Gentleman in Moscow by Amor Towles
Rostov the ever gentleman versus the Bolsheviks, all while sentenced to be a prisoner inside the Metropol Hotel. Great character, pathos and twists contained within while the outside world changes over a thirty-year period.

Thomas Jefferson and the Tripoli Pirates: The Forgotten War that Changed American History  by Brian Kilmeade
Early utilization of the Marine Corps and the refined definition of the role of the U.S. Navy- combination of bravery, piracy, and deception. What's not to like?